It wasn’t always easy being the son of a super villain! Jean-Balthazar knew something about it! 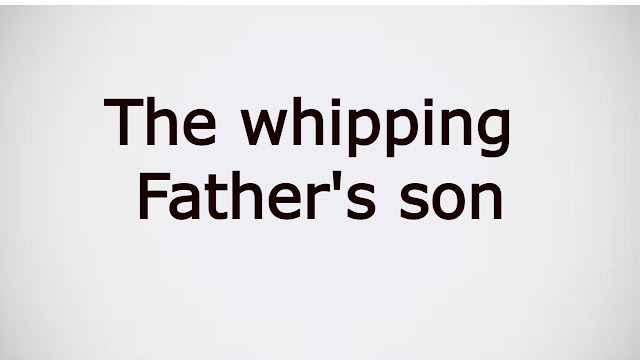 December, the busiest month of the year, was fast approaching. His father, an abominable bearded man all in black, must have frightened the children who had not been good during the year. Wrapped up in his evil broad-hooded cloak, Father Fouettard cracked his whip. In a hollow voice, he said to her:

– You know, son, this is not a game! What I do is really important! These little monsters must understand that the gifts distributed by this devil of Santa Claus are deserved!

– But it’s not for us, the Whipers, to punish all the rascals in the world! Parents, that’s what it is!

Father Fouettard glared at him. Jean-Balthazar curled up on himself. Wacky and hyperactive, JB was never immune to a lingering whiplash. Since entering the school of whipers, he had been doing a series of nonsense which made his father angry. Last week, he snuck into the teachers’ locker room to paint pink all the fake black beards worn during the Fouettards ceremonies. When his father, the principal of the school, saw his sacred hairpiece covered in this horrible color, he let out his anger:

– JEAN-BALTHAZAR, in my office, right away!

He stroked his whip, a wicked smile on his lips. All the students had gathered to witness the promised spectacle of nameless cruelty. Jean-Balthazar walked forward with his head bowed. The door slammed shut behind him. Trembling with fear, he stammered out a few excuses:

– Sorry, dad! But it wasn’t mean. I couldn’t help it. Plus, I only used water-based paint which was easy to remove!

– You know that pink is a forbidden color among Fouettards! Where did you find it?

With his friend Barbas, they had the idea to borrow a pot of pink paint from the elves school. They were almost there when a mischievous blonde girl perched on the branch of a hundred-year-old fir saw them. As agile as a monkey, she appears out of nowhere screaming:

– What are you doing here ? You do not have the right !

The strange little girl walked a little closer to the two boys. Much taller than them, she looked at them amused. Jean-Balthazar was very impressed by his courage. Puzzled, he bombarded her with questions:

– Are you Santa’s daughter? Where is he now? Did you lose your tongue or what?

His silence annoyed him. Who did she think she was? All the children had always talked about Santa Claus and his wonderful elves. Papa Christmas here, Papa Christmas there! And, his father, then! He counted for nothing… She was going to regret being on the side of the good guys who ruined her life!

– Noelle? Is your name Noëlle? It’s marked on your Santa Claus overalls! Not very original as a first name! Why are you yelling at us like that!

– I wanted to know why the Fouettards were taking the risk of coming here!

She burst out laughing when Barbas explained to her the reason for their intrusion into enemy territory.

– If I give you a pot of flashy pink paint, you take me with you! I want to see the show!

JB smiles. He had found a new playmate much smarter and more naughty than him! Noelle readjusted her cap and showed them the most discreet path.

Still locked in his office, Father Fouettard did not budge. Jean-Balthazar had to learn the lesson:

– As the principal of this school, I ask you to gather your things and to leave. You are no longer worthy of becoming a Fouettard!

Two microscopic tears appeared at the edges of his eyes. Jean-Balthazar remained motionless, ashamed of what he had done.

Noelle had heard everything. She came out of her hiding place and put the pot of pink paint in front of Father Fouettard. The girl confessed to him without delay:

– It’s me ! I painted all the whipers’ beards! JB had nothing to do with it! I apologize, Mr. Fouettard. I’ll clean it up.

Barbas stormed in. Without hesitating for a second, he also pointed to himself as the culprit. Jean-Balthazar definitely had very good friends who supported him despite everything. He thanked them and admitted that he was solely responsible for this big nonsense. The three friends apologized, promising never to do it again.

Father Fouettard, who until now had been silent, ordered them to sit down:

– The Fouettards, the elves, the Christmas family, our family, we all have an important role to play in these Christmas celebrations. I am counting on you to help us. Now oust! oust! I don’t want to see you anymore!

Finally, the office door opened. The whole school was holding its breath.

The illusion was perfect. Jean-Balthazar was limping, holding his leg. His costume was torn in several places. Barbas and Noelle fled in fear.

The Fouettards schoolchildren now knew that one should not challenge the authority of Mr. Headmaster or face severe punishment!

Being the father of a Fouettard child was not easy! Jean-Balthazar readily conceded it.

He did his best to become a wise and hardworking boy. But, it sometimes happened to him to slip… With Noëlle and Barbas, they found themselves in secret to make boxes with springs with false spiders with candy pink legs, bats with fuchsia wings, pangolins armed with multicolored scales… The imagination of the three friends was limitless! They invented hundreds of weird little gifts which they slipped into Santa’s hood. Scary or funny, these pranksters now had their place under the tree on Christmas Eve.