Once upon a time there was a kingdom of a proud lion in a forest. He was very proud of his kingdom

Once upon a time there was a kingdom of a proud lion in a forest. He was very proud of his kingdom. He abused other animals in the forest and refused to help any animal in times of need as he had a kingdom so he had a duty to take care of his subjects but unfortunately he could not be a good king. 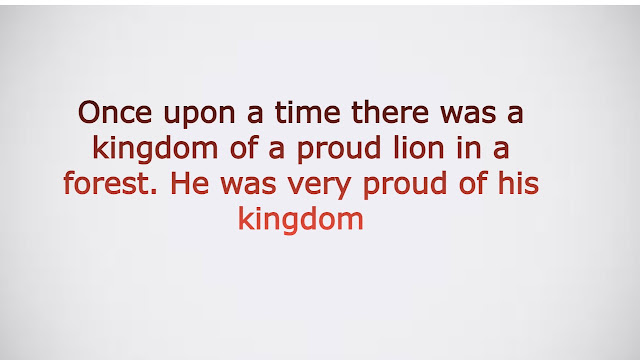 One day all the beasts of the forest came together and decided why not teach this king a lesson. Together they came to the service of the Lion King.

Crocodile: Peace King! We have a special feast by the side of our pool where a special meal has been arranged for you.

There, the ducks will show you fun tricks and take you for a walk around the pond.

The Lion King was very happy to hear all this and he accepted the invitation.

The next day, when the king went to the feast, the ducks were the first to show off their tricks, which made the king very happy.

But then what was the taste of the lion’s pride, everyone had to taste it, so no one helped him again and finally he drowned and his pride was reduced to dust.

Beware dear! We should never be arrogant because the end of arrogance is very bad but we should always be thankful for a lot of blessings.