I am a note. I was born in State Bank of Pakistan. From there I was taken to a shop in a big market in Karachi. In a few days I was locked in a large drawer of this shopkeeper. 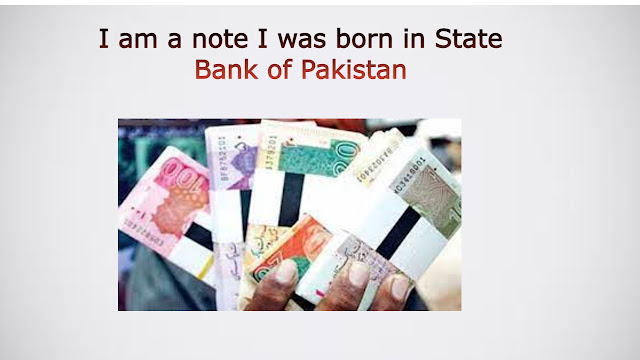 While playing, I slipped out of his pocket and fell near the flower beds in the school garden. The boy was very upset. He searched for me a lot, but I did not find him.

At last it was time for the assembly. He went inside.

The canteen owner gave me some vegetables.

The greengrocer gave me to his wife. She was making curry at that time. I got soup. I looked very dirty now. The greengrocer had two small children. He was very happy to see me, but the younger son started crying when he saw this.

He started arguing with his elder brother and started snatching me from him. In the same tug of war, I burst in the middle. The older boy taped me and stuck it on me. In this way I almost recovered. Both brothers replaced me. Buy gossip from a gossip monger and eat it together.

The gossip monger joined some of my colleagues with me and bought meat from the butcher shop. The dirty hands of the butcher got more stains on me. The butcher went home and handed me over to his wife. During this time my number exploded a little.

The butcher’s wife took me to a shop to buy shoes. The shoemaker refused to accept me, because my number was cracked. On the way back, the butcher’s wife threw me in the trash. Now I am very old, dirty and dirty. My body is full of wounds. I want someone to pick me up, because I have a picture of Quaid-e-Azam on me. I have not accepted the disrespect of Quaid-e-Azam.